Our next beginners course date will be set when we return to Fencing. 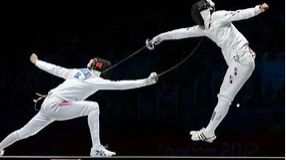 Dear Club Fencer & Members, I hope this finds you are safe and well.  When we had to shut down fencing activity at BFC so quickly in March we never imagined that we would be stood down for so long. Although government guidelines are coming out by the day about sporting activities coming back on stream they are mostly aimed at outdoor sports.

The Centre for Sport and Fitness at the University of Birmingham is taking all these and more on board, having to define how it deals with car parking and social distancing within the campus buildings.  We understand they do not expect to have a full picture before June 30th.

In the meantime we are awaiting the latest information from British Fencing Association regarding how we specifically manage the sport for welfare and health & safety purposes.  We will be back in touch as soon as we have further updates.

During  the current situation with the Covid-19 virus, any fees  paid will be  reimbursed/carried forward  to the restart date when we  return to  training.

All of our sessions start off with a general warm-up and short footwork session.

Tuesday evenings we run smaller group session/sessions & work on a particular stroke/tactical/footwork topic to improve fencers knowledge and ability.  This is followed by free-play and competitive sparring bouts, where they are able to put into practice what they have learnt. Members are also able to ask for individual lessons from our experienced coaches.

On Thursday evenings the warmup/footwork is followed by individual lessons and free-play, all 3 weapons have training opportunities. A number of our members will fence on both Tuesday and Thursday sessions.  The evening's structure is not suited to complete beginners, and most fencers will have reached the stage of having their own fencing kit, or parts there of.  Full fencing kit is required on this session.

Club members are  able to receive upon request one-to-one lessons with our coaches at all 3 weapons  at each session.

Saturday morning class is for our junior members.  As our junior club members progress they will graduate to Tuesday/Thursday nights.

We have seen many of our junior members carry fencing on when at university and have returned to their "home" after graduation to continue their fencing career.

Birmingham Fencing Club are always keen to recruit new members - Adults or Children, experienced or complete beginners, all are welcome!

Contact us for more information or check the Courses page.

Check out our 'Courses' page for  dates and times.  There are several courses throughout the year.

Birmingham Fencing Club welcomes members of all different abilities and skills.  Whether you are looking to improve your skills and compete locally, nationally or internationally, or simply want to learn something new, keep fit and have fun.

Founded in 1926 Birmingham Fencing Club (B.F.C.) is a unique community sports club with an amazing history and connectivity in the area and within Fencing as a Sport in this country.  It has a management committee drawn from within its fencing membership and hires venues within the University of Birmingham and locally as required to deliver the sport of Fencing.  In line with current legislation it manages its own finances.  The Club require all coaches, both professional and volunteer, to be fully accredited and vetted to national standards set by the British Fencing (B.F.) which is the National Governing body for the Sport of Fencing.

B.F.C. is an affiliated member of British Fencing.

B.F.C. works collaboratively with the University of Birmingham's own Student Fencing Club (U.B.F.C.). Whilst supporting it with volunteer coaching, mentoring and equipment loan, it is not part of the University or U.B.F.C.

B.F.C. is run in all aspects to meet the Sports England Initiative ClubMark standards and was one of the first fencing clubs in the Midlands to do so.

As an affiliated body to British Fencing the Club (B.F.C.) is compliant in upholding the duties and responsibilities under the Working Together to Safeguard Children Act 2018 (England only)

Whilst everyone within fencing has a responsibility to safeguard and protect young people the  role of Welfare Officer is  to promote good practice within the club.  The Welfare Officer is the named point of contact for young people themselves, parents/cares, coaches and volunteers when they have concerns and to understand and use British Fencing's reporting procedures in case a concern is raised.

In practice B.F.C. has a number of Welfare Officers who have undertaken, as volunteers, the required training to national standards.  They are: